Seven Reasons Why the Roman Empire Fell: What the USA can learn 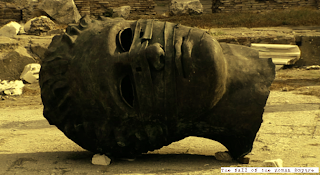 America is like a healthy body and its resistance is threefold: its patriotism, its morality and its spiritual life. If we can undermine these three areas, America will collapse from within.


There are seven reasons (among others) why the Roman Empire fell. The most important of the seven have to do with the break down of religion, morality and the family. Everything else rippled from these three factors.

1. Family disintegration: Bachelors became more highly esteemed than husbands and fathers in society. In the second and third century of the Christian era, it had become a stigma for men to be “tied down” to families. Sexual liberation, especially among men, was lauded.

2. Low birth rate: During the centuries that followed Christ’s ascension into heaven, the Roman Empire had already experienced a precipitous drop in the birth rate. This trend started when Augustus, the Roman emperor, reigned. Even he tried to promulgate incentives for families to have more children; but it was too late. Before Augustus, it wasn’t unusual for couples to have up to twelve children. In the decades that followed, couples, much like today, only had one or two children at the most. Over the centuries, the city of Rome went from a million inhabitants to less than fifty thousand. Depopulation had a devastating affect on both the Roman empire and ancient Greece.

3. Fragmentation of religion: There were so many gods for so many special causes and towns- especially because the Roman religion imported gods from the Hellenistic culture (Greek culture spread throughout the Roman Empire) -that the ancient pagans despaired of having any uniformity. And over the years, they increasingly found it difficult to find meaning in the rituals or even to believe the veracity of their own creeds.

4. Language, literature and art had fallen into disrepair. Like modern art today, Roman art was of poor quality because it was an escape from reality. Latin was badly used and literature became vulgar.

5. Centralization and expansion of government: Take for instance the third century A.D.(200's) Ralph Martin Novak, author of "Christianity and the Roman Empire", provides a sobering statistic of 3rd century Rome which serves as a warning to our U.S. government.

He said, "It is estimated that whereas at the start of the third century A.D. the Roman emperors employed only about 300 to 350 full-time individuals in administering the Empire, by 300 A.D. this number had grown to some 30,000 or 35,000 people. The expense of this vastly increased administrative and military structure was an enormous burden on the people of the Empire, and the burden only grew more oppressive over the course of the fourth century A.D....Rome's efforts to collect the taxes necessary to pay for defense and administration exacerbated the already deep social and economic divisions within the Roman empire."

Because the Roman government so starved agricultural incentives, miles and miles of farmland was left uncultivated and therefore unused.

6. Citizenship became cheap and immigration easy. Barbarians from outside of the Roman Empire had easy access to Roman institutions and they further began to infiltrate the Roman army. Hence, the loyalties among Roman soldiers became divided. Military campaigns had faltered as a result. What is more, Roman culture became vulnerable to fragmentation.

7. The culture of death was alive and well. Consider the following practices which had political, legal and social sanction:

a. Baby exposure: This practice of infanticide, back then called “baby exposure", couples would simply throw unwanted babies away. They would either kill them outright or take them out to the garbage. This was widely practiced. Seneca, a Roman philosopher, said this about killing babies: “We drown even children who at birth are weakly and abnormal. Yet it is not anger, but reason that separates the harmful from the sound.”

b. Gladiator games: Gladiators, slaves and prisoners would be killed in these blood sports for the purpose of entertaining the unemployed mob. Seneca, the same Roman philosopher who approved of infanticide and who was later forced to commit suicide by the Emperor Nero, said this about a gladiator game he saw:

“I come home more greedy, more cruel and inhuman, because I have been among human beings. By chance I attended a midday exhibition, expecting some fun, wit, and relaxation…But it was quite the contrary…These noon fighters are sent out with no armor of any kind; they are exposed to blows at all points, and no one ever strikes in vain…In the morning they throw men to the lions; at noon they throw them to the spectators.”

c. Slavery was prominent and the social subordination of women and children to that of men was protected by law. Not much more needs to be said about that.

These seven factors made the Roman Empire vulnerable to outside foreign forces starting in 410 A.D. St. Augustine witnessed the beginning of its collapse. And for several hundred years the Catholic Church had to pick up the pieces from what was left of pagan Rome and build a new Christian civilization. But it took blood, sweat and tears to do it.

Dr. Phil Jenkins, author of "The Lost History of Christianity: The Thousand-Year Golden Age of the Church in the Middle East, Africa, and Asia- and How it Died," once wrote the following: "Dechristianization is one of the least studied aspects of Christian history. Partly, the lack of interest in vanishing churches is a matter of practicality, in that dying organizations tend not to produce records of their own extinction." The fact is...if the Church goes down, the nation goes with it. This has been a recurring reality throughout world history.

Perhaps this is why out of 45 goals Communists set out to achieve in 1958, #27 and #28 took direct aim at Christianity. According to Cleon Skousen's book, "The Naked Communist," these two goals read as follows:

#27. Infiltrate the churches and replace revealed religion with "social" religion. Discredit the Bible and emphasize the need for intellectual maturity, which does not need a "religious crutch."

#28. Eliminate prayer or any phase of religious expression in the schools on the ground that it violates the principle of "separation of church and state."

And finally, let us not forget the infamous words of Joseph Stalin, dictator of the Soviet Union:
"America is like a healthy body and its resistance is threefold: its patriotism, its morality and its spiritual life. If we can undermine these three areas, America will collapse from within."

Unfortunately, the Communists, including Stalin, knew their history well. They knew why Rome fell. If America falls, it will be for the same reasons every other nation, civilization or empire fell; and that reason has everything to do with religion, morality and the family.
Posted by Joe at 8:24 PM