The Emnity between Catholicism and Totalitarianism II 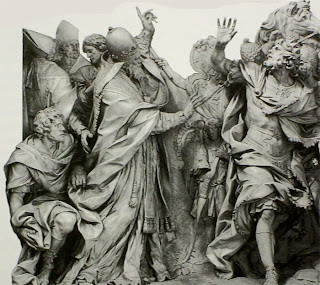 Historically, the Catholic Church inspired principles and virtues which led to the veneration of the individual person over that of the State or any institution. Public institutions come and go but unlike institutions the individual person possesses an immortal soul. As Pope Pius XI said in his encyclical On Atheistic Communism, man is a microcosm, a world in miniature. With the Light of the Gospel illuminating the dignity of the human soul, the State ceased to be supreme. In early Christianity, the Bishops of the Church reminded emperors, kings and civil leaders that they are the servants of the people. But as the influence of Christianity faded in modern times, the cult of the State reared its ugly head again. Unlike its pagan predecessor, however, the post-Christian or the modern State has, as the twentieth century has shown, capable of being totalitarian. With modern technology, it is possible for the State to be omnipresent, controlling every component of society.

There are four reasons why Catholicism can answer the claims of the Totalitarianism of the State. Ultimately, any kind of sectarian religion or ideology which relies only on ideas- and here I include Conservatism -can help stem the tide of an all-powerful State as a defensive measure but only with a temporary result. The answer to totalitarianism has to go deep and it has to cover the spectrum of human existence for favorable results to be permanent.

First, Catholicism is totalitarian in the best sense of the word. There is not a facet of life which does not come under the purview of God and which is not ministered to by the Catholic Church. The response to the Totalitarian State cannot be met with partial commitments or half measures; the answer must be total.

Second, unlike Judaism, Islam or Protestantism, the Catholic Church possesses a central authority that is well-defined and one that speaks for all Catholics. It is the prophetic teaching office of the pope which is also known as the papacy. This two-thousand year old office through which St. Peter continues to minister has served to keep the Church from being absorbed into the State.

Thirdly, the Catholic Church is the only religious body that has a two thousand year moral and political theology. With developed and well-defined principles Catholics can mount a consistent and coherent response to political totalitarianism; one that is grounded in the truth of God and human nature. However, if a church is as fluid as, let’s say, the Anglican Church has been over the last century, changing fundamental doctrines, then conformity to an all-powerful State is all the more likely.

Fourth and last point, and probably the most important, is the fullness of grace and moral vigor the Lord confers through the Catholic Church. Through the Sacraments, and principally through the Divine Liturgy, Jesus Christ gives his life; and it is in the initiation of these mysteries of Christ that people were not only sanctified but civilized. Ideas alone or even truth alone is insufficient in sustaining a Christian civilization.