What God told St. Catherine about heaven and hell 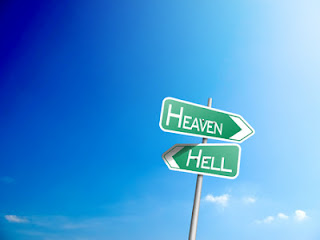 Excerpts: Taken from the Classics of Western Spirituality edition of The Dialogue. Commentary added below.

When Our Lady of Fatima appeared to Lucia, Jacinta and Francisco in 1917, she brought heaven with her and allowed them to taste its sweetness. But she also deemed it to be of vital importance that the three children see hell too. And from this frightful vision all three seers were inspired to make reparation for sinners through acts of self-denial. Without the knowledge of heaven and hell, the Gospel is simply unintelligible. It just doesn't make sense. Both eternal destinies must be once again proclaimed and taught if we are to understand God's plan for us.

What is true in modern times was also true in the fourteenth century. It was then that St. Catherine of Sienna received private revelations from God the Father. And during these mystical experiences God had spoken to her at length about his providence, the spiritual life, the Church and eternity. For our benefit, this “dialogue” between God and St. Catherine was written down and made into a spiritual classic: a book known as The Dialogue. Although Catholics are in no way required to believe in this private revelation of St. Catherine’s, nevertheless, her writings has been held up by the Church as being worthy of belief and theologically sound.

Below are excerpts from The Dialogue on hell and then heaven (I wanted to save the good news for last). Each account provides compelling insights on what eternity is like with and without God. Perhaps you have never looked at heaven and hell in this way. But first we will present the the description of hell.

God the Father said to St. Catherine of Sienna, “I tell you, in hell there are four principal torments and all the others are offspring of these.

The first is that these souls are deprived of seeing me. This is so painful for them that if they could they would choose the sight of me along with the fire and excruciating torments, rather than the freedom from their pains without seeing me.

The first suffering revives the worm of conscience, and this is their second torment. For when they see that their sinfulness has deprived them of me and of the company of the angels and made them worthy instead of seeing the demons and sharing their fellowship, conscience gnaws away at them constantly.

The sight of the devil is their third suffering, and it doubles every other torment. At the sight of me the saints are in constant exaltation, joyfully refreshed in reward for the labors they bore for me with such overflowing love and to their own cost. But it is just the opposite for these wretched little souls. Their only refreshment is the torment of seeing the devil, for in seeing them they know themselves better: that is, they recognize that their sinfulness has made them worthy of him. And so the worm gnaws on and the fire of conscience never stops burning.

Their suffering is even worse because they see the devil as he really is- more horrible than the human heart can imagine. You will recall that when I once let you see him for a tiny while, hardly a moment, as he really is, you said (after coming to your senses again) that you would rather walk on a road of fire even till the final judgment day than see him again. But even with all you have seen you do not know how horrible he really is. For my divine justice makes him look more horrible than still to those who have lost me, and this is in proportion to the depth of their sinfulness.

The fourth torment is fire. This fire burns without consuming, for the soul cannot be consumed, since it is not material (such as fire could consume) but spiritual. But in my divine justice I allow my fire to burn these souls mightily, tormenting them without consuming them. And the tremendous pain of this tortuous burning has as many forms as the forms of their sins and is more or less severe in proportion to their sins.”

“[J]ust souls who end in loving charity and are bound by love can no longer grow in virtue once time has passed. But they can forever love with that same affection with which they came to me, and by that measure will it be measured out to them. They desire me forever, and forever they possess me, so their desire is not in vain. They are hungry and satisfied, satisfied yet hungry-but they are far from bored with satiety or pained in their hunger.

Forever they rejoice in love at the sight of me, sharing in that goodness which I have in myself and which I measure out to them according to the measure of love with which they have come to me. They are established in love for me and for their neighbors. And they are all united in general and special love, both of which come from one and the same charity. They rejoice and exult, sharing each other’s goodness with love and affection, besides that universal good which they all possess together. They rejoice and exalt with the angels, and they find their places among the saints according to the different virtues in which they excelled in the world.

And although they are all joined in the bond of charity, they know a special kind of sharing with those whom they loved most closely with a special love in the world, a love through which they grew in grace and virtue. They helped each other proclaim the glory and praise of my name in themselves and in their neighbors. So now in everlasting life they have not lost that love; no, they still love and share with each other even more closely and fully, adding their love to the good of all.

For I would not have you think this special good they have is only for themselves. No, it is shared by all of their just companions, my beloved children, and by all of the angels. For when a soul reaches eternal life, all share in her good and she in theirs. Not that anyone’s vessel can get any larger or have need of filling. They are full and can grow no larger. But they experience a new freshness in their exaltation- a mirthfulness, a jubilation, a gladness- in knowing this soul. They see that by mercy they have been lifted up from the earth in the fullness of grace, and so they are exultant in me over the good that soul has received from my goodness.

And that soul finds joy in me and in all these souls and blessed spirits, seeing and tasting in them the sweetness of my love. Their desires are a continual cry to me for the salvation of others, for they finished their lives loving their neighbors, and they did not leave that love behind but brought it with them when they passed through that gate which is my only-begotten Son. So you see that whatever bond of love they finish their lives, that bond is theirs forever and lasts eternally.

They are so conformed to my will that they can will only what I will. When time came to an end for them and they died in grace, their freedom was so bound with the chains of charity that they are no longer capable of sin. Their will is so one with mine that even if a father and mother saw their child in hell, or a child its parent, it would not trouble them: They would even be content to see them punished, since they are my enemies. Nothing puts them at variance with me. All of their desires are fulfilled…

The goodness of these souls is beyond what your mind’s eye can see or your ear hear or your tongue describe or your heart imagine. What joy they have in seeing me who am all good! What joy they will yet have when their bodies are glorified! But while they do not have this latter good until the general judgment, they do not suffer. They lack no happiness, for the soul is filled, and in this good fullness the body will share….”


“These souls wait for divine judgment with gladness, not fear. And the face of my Son will appear to them neither terrifying nor hateful, because they have finished their lives in charity, delighting in me, and filled with good will toward their neighbors. The different appearances of his face when he comes in my majesty for judgment will not be in him but in those who are to be judged by him. To the damned he will appear with just hatred, but to the saved, with mercy and love.”
___________________________________________

1. I Survived Beyond and Back:

Note of caution: With any given testimony of someone’s personal experience of the supernatural, we are, as bystanders, in no way obligated to believe them. In fact, it is a good idea to begin, like the Church, as a reasonable skeptic. There could be any number of reasons why someone’s account errors.